Circuit of The Americas and ESPN to Collaborate on Event for Four Years, beginning May 2014; Bid edges out Chicago, Detroit and Charlotte

ESPN, the leading action sports content provider and creator of the X Games, has chosen Austin, Texas, as the next North American host city for the X Games. The Texas capital will host an X Games summer event for four years beginning in May 2014 at the new 1,500-acre Circuit of The Americas sports and entertainment complex in southeast Austin. The selection follows a highly competitive eight month long process in which Austin ultimately edged out Chicago, Detroit and Charlotte, N.C. “We are incredibly excited to partner with the Circuit of the Americas to bring the X Games to Austin in May,” said Scott Guglielmino, sr. vice president, ESPN programming and X Games. “We believe that Bobby Epstein, his team and the fantastic COTA facility provide a unique opportunity to grow the X Games in a new region of the country and in a city that has a proven track record of embracing big events.  Throughout the site selection process we were very fortunate to have great interest from Chicago, Charlotte and Detroit.  Ultimately, the combination of resources, support and fit brought us to Austin and we couldn’t be happier.”

“We’re ecstatic to be selected and thrilled to help bring ESPN’s X Games to Austin,” Circuit Founding Partner Bobby Epstein said.  “The X Games is a remarkably cool event that perfectly fits Austin’s culture and our world-class sports and entertainment venue. We want to thank the Central Texas community and its leadership, the Austin Sports Commission and the local action sports community for getting behind us, as well as project lead Paul Thornton and the entire Circuit of The Americas team for the hard work that went into preparing and securing this bid. It’s been a wonderfully collaborative effort and a big win for Texas that will pay off for years to come in terms of the X Games economic benefit to our region.”

“It’s an honor to be selected by ESPN to host this prestigious international competition, and the City of Austin welcomes the thousands of competitors, fans and media representatives that will join us for the summer edition of the X Games next year,” Austin Mayor Lee Leffingwell said.  “The X Games celebrate fitness, courage and individuality—traits greatly valued by our community—and we look forward to showing the world all of the wonderful things Austin has to offer.  We also want to commend the three other cities in contention, Charlotte, Chicago and Detroit, for their excellent campaigns and a hard-fought competition.”

Red McCombs, another of the Circuit of the America’s founding partners, added, “This is a great day for the State of Texas, and we’re proud that Circuit of The Americas could help lure an event of this magnitude to its capital city of Austin. We created Circuit of The Americas to be a year-round destination for the best sports and entertainment properties in the world, and this shows the natural evolution of our business.  The ESPN X Games will benefit the regional tourism industry and add to Circuit’s growing reputation as a significant economic engine and jobs generator for Central Texas.”

X Games Austin will be held May 15-18, 2014.  The full schedule of X Games 2014 events will be announced in the near future.  It is anticipated that X Games Austin will see the majority of the competition hosted at the Circuit of The Americas, though some of the event will be hosted in downtown Austin as well. More details about the venue and sports disciplines will be shared in the weeks ahead.  Like other events on the X Games schedule, X Games Austin will be distinct and reflect the vibe and culture of the city, tapping into its rich music and cultural scene to surround the competition with a festival that highlights the intersection of sports and lifestyle that exists in action sports. To sign up for Austin X Games event updates and ticket information, visit www.xgamesaustin.com.

Fans can get further updates and information by liking X Games and X Games Austin on Facebook, and get complete action sports coverage all year long at XGames.com.  Press can find information, press releases and more at ESPNMediaZone.com.

ESPN began its RFP (Request for Proposal) process for the new host of North America in 2012 as the existing agreement between Los Angeles partner AEG concludes in 2013.  In January, ESPN announced 13 qualified cities interested in hosting the X Games in North America.  ESPN engaged in discussions with the various cities as they assembled their proposals.  All official proposals from cities interested in hosting an X Games were due on April 2 and the four finalist cities were officially announced later in the month.

X Games is nearing the end of its first year of global expansion and transformation, with events already held in Aspen, Colo.; Tignes, France; Foz do Iguaçu, Brazil; Barcelona, Spain and Munich, Germany.  The six event schedule will conclude in Los Angeles August 1-4, where it will celebrate the role of Los Angeles in the growth of X Games during its 11-year run as host city.  So far this year, more than half a million fans have attended X Games events.

X Games is also in the midst of an RFP process to host its North American winter event, following the final year of its current agreement with Aspen Skiing Company. Proposals from qualified cities in North America to host the winter version of the X Games were due in June, with a decision regarding the future winter event to be made this fall.

Circuit of The Americas 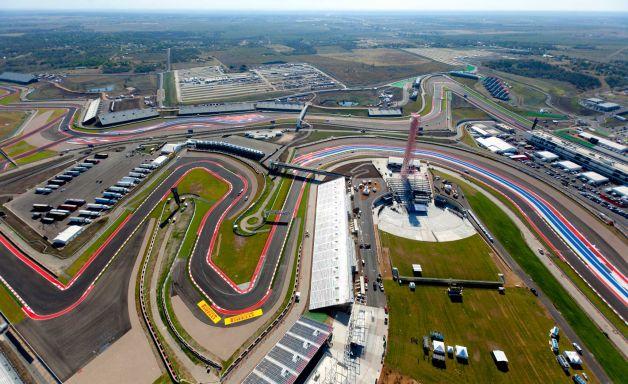 About Circuit of The Americas

Circuit of The Americas is a world-class destination for premium sports and entertainment, which was designed to host all classes of racing, from motor power to human power. The Circuit is home to the FORMULA 1 UNITED STATES GRAND PRIX, which was just named the 2012 “Sports Event of the Year” by SportsBusiness Journal/Daily. The inaugural F1 USGP recorded a three-day attendance of more than 265,000 fans with 117,429 attending the race on Nov. 17, making the Circuit’s first Grand Prix the second-most attended Formula 1® race of the season.

Since its grand opening in the fall of 2012, Circuit of The Americas has also hosted the world’s premier motorcycle racing series, MotoGP™; V8 Supercars™, the most popular motorsport in Australia; and the historic U.S. series GRAND-AM Road Racing™. This fall, the Circuit will host two of the most popular endurance racing series in the world, the American Le Mans series and the FIA World Endurance Championships, as well as the U.S. Vintage National Championships and the first leg of the Tour of Austin, a popular bicycle race. Circuit of The Americas is the only U.S. racetrack to host three World Championship auto racing series (Formula 1, MotoGP and World Endurance Championships) within one year’s time.

The 1,500-acre complex features a variety of permanent structures designed for business, education, entertainment and race use, with only 350 acres fully developed. The 3.4-mile undulating racetrack was designed by the world-famous architectural and engineering firm, Hermann Tilke GmbH & Co., and features dramatic, natural elevation changes, including a 133-foot climb into its signature Turn 1. The 20-turn circuit incorporates some of the best-loved and most challenging turns from other iconic Formula 1 tracks around the world.

Circuit of The Americas is also home to the Austin360 Amphitheater, an expansive outdoor live music space, featuring a 14,000-person capacity and the largest permanent stage in Central Texas. Just half way through its freshman season, the amphitheater has already hosted some of the biggest names in country and popular music, including Jimmy Buffett, Kenny Chesney, Dave Matthews Band, Mumford & Sons, The Lumineers and Zac Brown Band.  At the base of the Austin360 Amphitheater is the Circuit’s 25-story Observation Tower, the venue’s most noted architectural element.  The Tower features a large observation deck with 360-degree views of the racing circuit, downtown Austin and Texas Hill Country.

Circuit of The Americas’ paddock area is home to a 270,000-square foot Pit/Paddock Building with 34 garage bays and two upper levels of hospitality space.  Additionally, the 44,000-square foot Event Center hosts business and social functions and serves as the venue’s Media Center during major sports and entertainment events.  Also among the facility’s offerings is a massive grandstand with corporate suites, a chic, multi-purpose lounge space and permanent seating for more than 9,000 guests.  A state-of-the-art medical facility provides emergency medical care for competitors and spectators alike. The venue has on-site parking capabilities for approximately 25,000 vehicles, permanent depots for shuttle buses and taxis, permanent RV hookups, ample room for dry camping and a heli-stop.