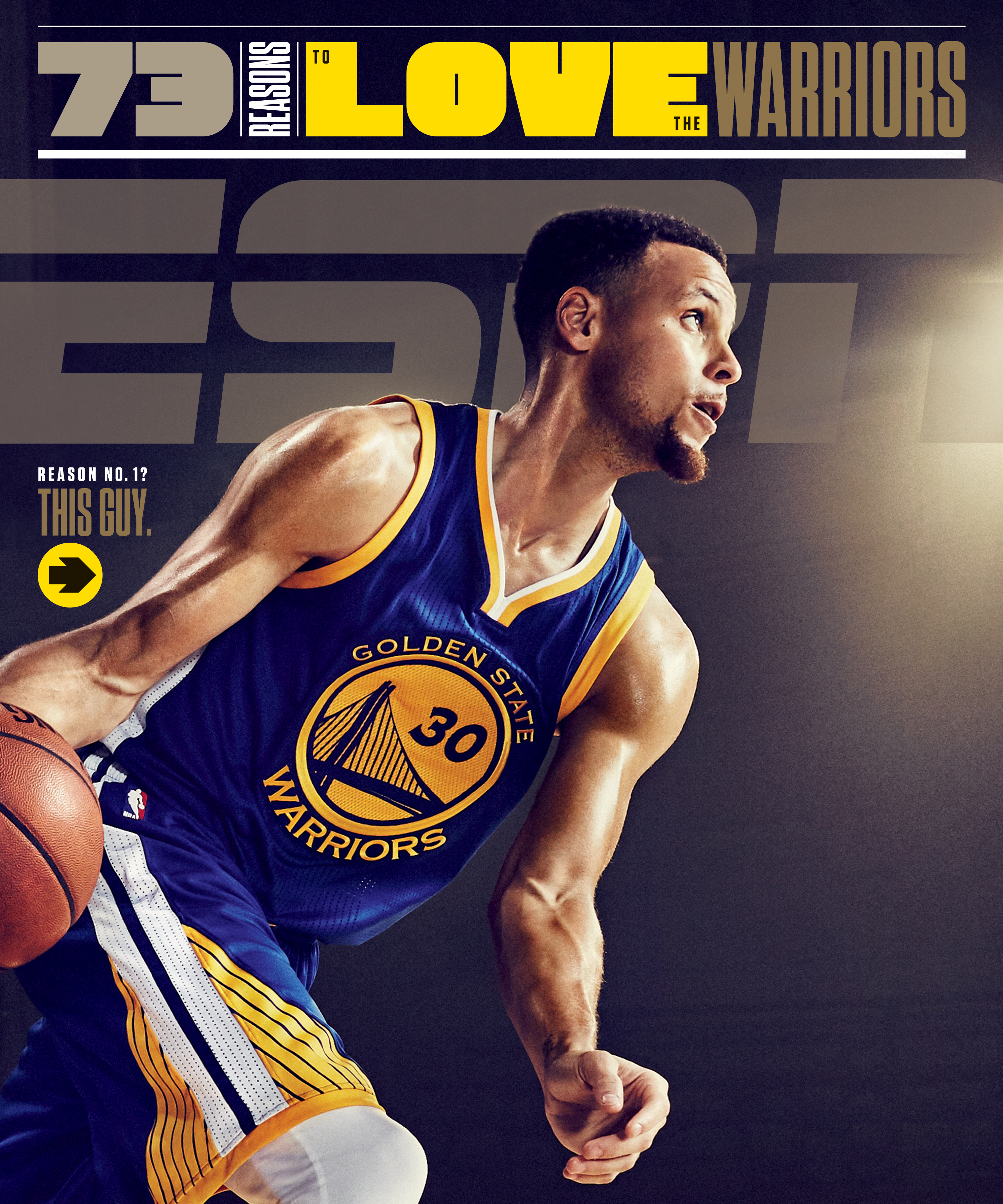 ON THE COVER: In honor of their quest for a record-breaking 73rd win, we’re diving deep into the Warriors. We’ll break down the Steph Curry-ization of the basketball world and how the Warriors represent everything modern about today’s NBA in “How Stephen Curry is revolutionizing the game.” By Henry Abbott

The Game That Changed Everything

We’re diving into the latter stages of Game 3 of the 2015 NBA Finals, the singular point at which MVP Stephen Curry solved the riddle of the extremely high-risk defense LeBron James and the Cleveland Cavaliers had used to befuddle the Warriors in the first couple games. From that moment on, the Warriors have dominated the Cavs. We re-tell the story of this game, which reveals how and when Stephen Curry became the best player in the world. By Kevin Arnovitz

You won’t believe how Nike lost Steph to Under Armour

Everyone knows Stephen Curry signed a record-breaking deal with Under Armour in October. But no one knows the tale of the disastrous boardroom meeting where executives presented their plan to brand Curry as the next great Nike superstar. The presentation went off the rails: On the opening slide, they misspelled Curry’s name. Even the PowerPoint file name, which was prominently displayed on the massive screen, was the same as the one they used to pitch Kevin Durant. This is the behind-the-scenes story of the most botched shoe deal in NBA history. By Ethan Sherwood-Strauss

What’s the Deal with Draymond Green?

Warriors forward Draymond Green has been an essential part of the team’s historic run at 73 wins—and he’s also the answer to the question: What does an ideal second banana look like? Green and Steph Curry in combination, on every level—technical, emotional, communicative, etc.—are the keys to the Warriors’ recent success. By Kurt Streeter

The Suffering of Steve Kerr

When Warriors coach Steve Kerr announced in October that he’d be taking a leave of absence, he said it was to recover from back surgery. Four months later, he’s just now returning to the court. This is the behind-the-scenes story of Kerr’s incredibly scary prognosis and debilitating pain, which remains far more serious and career-threatening than anyone knew. By Ramona Shelburne

Steph Curry Ticks Off the Old Guard Just Like Dr. J Did

NBA greats from yesteryear—Oscar Robertson, Charles Barkley and Isiah Thomas, to name a few—are not fans of the style of play in the league today. But columnist Howard Bryant writes that it’s time for the NBA’s elders to give new-age stars like Steph Curry their just due.

The (Future) Greatest Series Ever

We outline what most NBA fans have been looking forward to for the entire season: a Western Conference finals matchup between the Warriors (and their league-best offense) and the Spurs (and their league-best defense). We’ve asked various NBA analysts to give us metric-based tidbits that will provide insight into that hypothetical series, from matchup and lineup data to pace of play. By Magazine staff

Voices: Ten years after the Duke lacrosse scandal, Jessica Luther writes that accusations of sexual assault at Yale illustrate a destructive legacy: making it acceptable to question the accusers.

Golf Confidential: Before the Masters, golfers anonymously dish on who they think will finish No. 1 this year, whether Tiger will win his 15th championship and if golfers care about winning a gold medal at the Olympics. By Hallie Grossman