The Jump, ESPN’s NBA news and discussion show led by host Rachel Nichols featuring high-profile analysts, reporters and special guests, returns to the daily ESPN programming lineup beginning Monday, Apr. 13 at 3 p.m. ET, with encores at 4:30 p.m. The show will be produced entirely remotely with high-level innovated technology that allows all talent and associated staff to work from their homes.

Nichols will also interview NBA All-Stars Jayson Tatum, of the Boston Celtics, and John Wall, of the Washington Wizards.

The Jump is available to stream on the ESPN App. 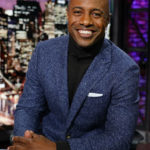