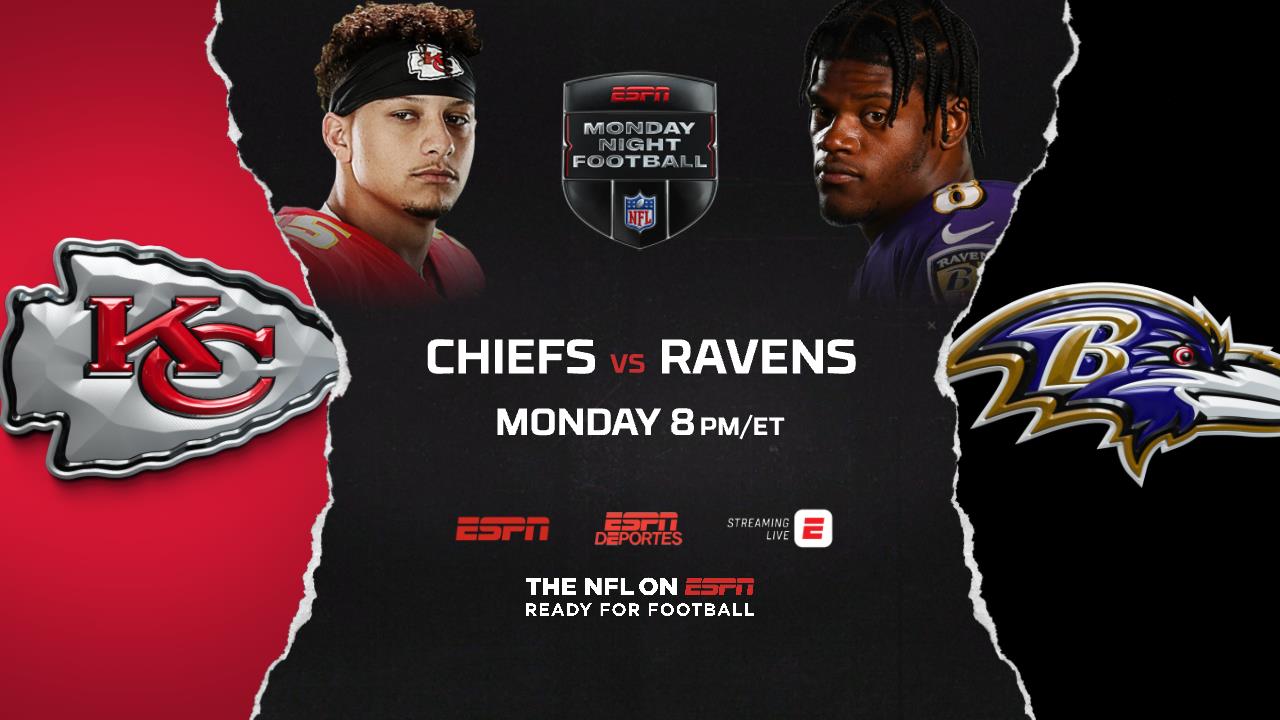 ESPN will blanket Monday Night Football’s undefeated Kansas City Chiefs-Baltimore Ravens (8 p.m. ET) showdown, which features a historic matchup between MVP quarterbacks Patrick Mahomes and Lamar Jackson. “MVP Monday” will feature multiplatform pregame coverage, diving into both the playing career and growth of the reigning Super Bowl MVP and NFL MVP in various storytelling ventures. ESPN’s coverage will build over the weekend and into Monday, as fans will hear from both Mahomes and Jackson in new interviews, be taken to their hometowns, re-live their dynamic collegiate careers, experience their vibrant, jaw-dropping plays once again, and so much more.

The 799th MNF game features the first matchup in NFL history between former MVPs, age 25-or-younger, and, with a combined winning percentage of .825 in their careers, the highest win percentage entering a matchup for two QBs who have started at least 20 games in their careers. Steve Levy, Brian Griese, Louis Riddick, Lisa Salters and John Parry will have the call from M&T Bank Stadium in Baltimore.

Hear from the Stars Before the Showdown on Sunday NFL Countdown; Narrative of Dual-Threat Quarterbacks Dissected on Monday Night Countdown
Mahomes’ conversation with NFL reporter Jeff Darlington and Jackson’s with MNF analyst Louis Riddick will debut over the weekend and be showcased across multiple shows, including Sunday NFL Countdown (10 a.m. – 1 p.m.) and Monday Night Countdown (6-8 p.m.). Both pregame shows will also dive into the bevy of storylines around the game. SNC will also look at both players top five plays, inclusive of their high school and collegiate careers and MNC will feature two unique features.

For SportsCenter (12-3 p.m.), ESPN took trips to Mahomes’ and Jackson’s hometowns to learn more about their growth into stardom. Additional content across SportsCenter includes:

Following the game, SportsCenter with SVP will have a complete recap with instant analysis, including NFL analyst Ryan Clark in studio and interviews with MNF analysts Griese and Riddick.