Rankings Reaction sponsored by Cheez-It returns for its fourth season with Mike Golic, Jr., Jason Fitz, and Christine Williamson live from Studio E in Bristol, reacting to and discussing the latest College Football Playoff rankings from the moment they are first unveiled on Nov. 24 through Selection Day on Dec. 20. Once again, they will bring in audience questions and insights to the forefront of the conversation. The show will be live on Twitter, YouTube, Facebook and the ESPN App. 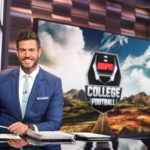