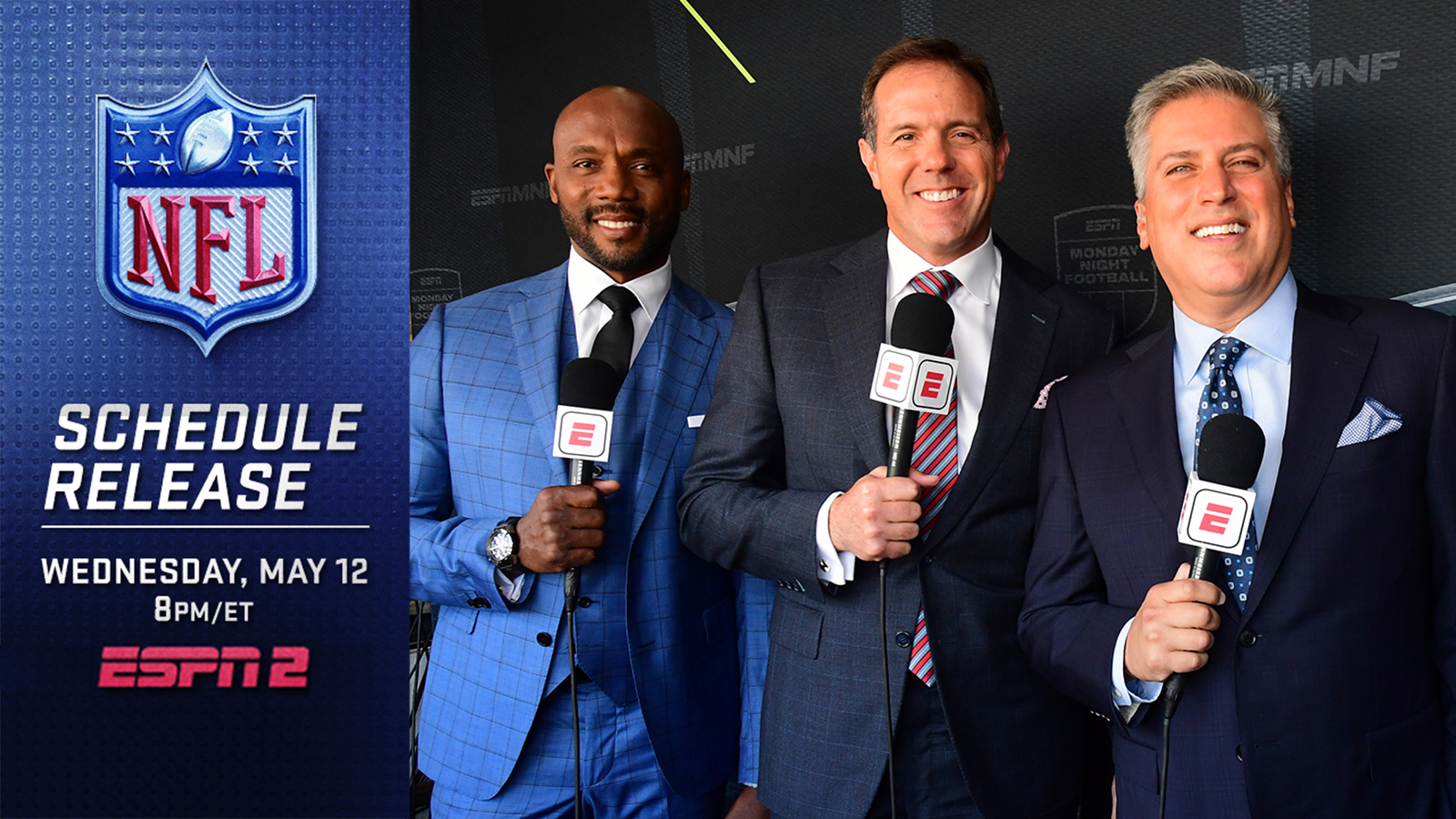 ESPN will usher in the 2021 NFL Schedule and the NFL’s ‘Biggest Season Ever’ with three primetime specials, all beginning at 8 p.m. ET, across six platforms  on Wednesday, May 12, as the organization celebrates the unveiling of the Monday Night Football and entire NFL season slate and delves into the signature matchups and storylines of the upcoming season. The primetime programming will provide a bookend to the day, which will begin with Good Morning America announcing Monday Night Football’s week 1 matchup exclusively (likely in the 8 a.m. hour).

The SportsCenter Special production will be three hours (8-11 p.m.), while Between the Lines is two (8-10 p.m.) and SportsNation is one hour (8-9 p.m.). Wednesday evening, ESPN.com will also provide a deep dive into the schedule, offering analysis on all 32 teams’ slate, individual team record predictions and a roundtable on the best games of the season.

Steve Levy, Brian Griese and Louis Riddick, the Monday Night Football Broadcast Booth, Headline SportsCenter Special on ESPN2 and ESPN+
Monday Night Football play-by-play commentator Steve Levy will host the three-hour SportsCenter Special and be joined by his broadcast booth analysts Brian Griese and Louis Riddick, as the team will react and provide immediate thoughts on the 2021 MNF schedule, the weekly franchise’s 52nd season. The trio will also explore key matchups throughout the season for a variety of teams, as they speculate on what could be ‘Games of the Year’ and contests that could define teams’ seasons. Senior NFL Insider Adam Schefter is also part of the special and guests are likely to join, including Los Angeles Rams’ Sean McVay.

Daily Wager Crew and ESPN’s Leading Fantasy Football Voice Matthew Berry Featured in the Vegas and Bristol Split Production on ESPN+
The ESPN+ Between the Lines: NFL Schedule Release show will include the cast of Daily Wager — Doug Kezirian, Joe Fortenbaugh, Tyler Fulghum, Steve Coughlin, and Anita Marks – and Fantasy Football Now including senior fantasy sports analyst Matthew Berry, host Field Yates, and insiders Stephania Bell and Mike Clay. The split Bristol-Las Vegas production will examine a variety of projections, including team wins, player’s statistics, and who may have award-winning seasons as the show focuses both on the odds and fantasy football angles of the upcoming season.

SportsNation Provides Instant Reaction, ESPN NFL Nation Insights on ESPN App, Facebook, Twitter, and YouTube
SportsNation, showcased on the ESPN App, Facebook, Twitter and YouTube, will be fronted by Treavor Scales, Gary Striewski, and Christine Williamson, as the three personalities will give their instant reaction, favorite matchups and other immediate thoughts to the schedule release. The hour-long special will also feature multiple ESPN NFL Nation reporters who will delve specifically into specific teams’ schedules.