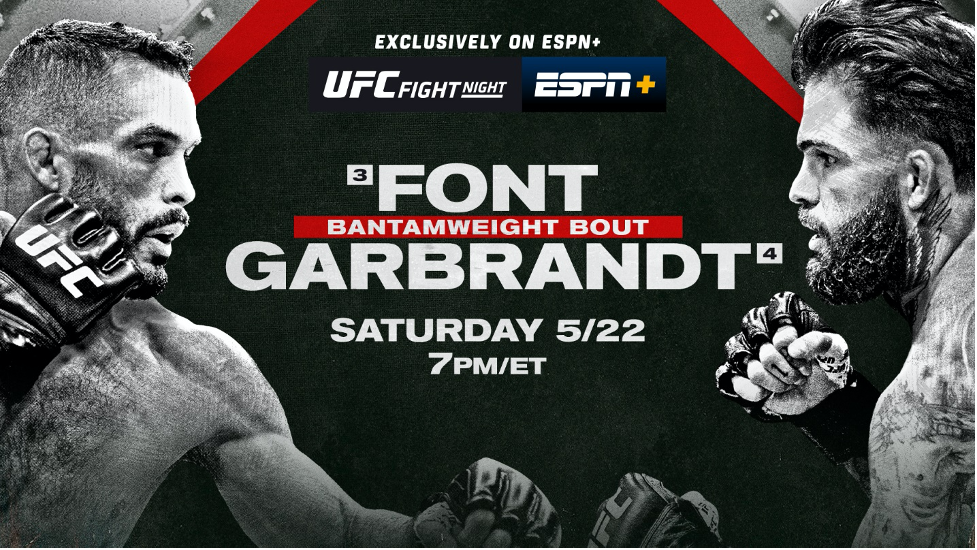 UFC FIGHT NIGHT: Font vs. Garbrandt is set for this Saturday, May 22, live from UFC APEX in Las Vegas. All fights will be carried exclusively on ESPN+ in English and Spanish, with the main card at 7 p.m. ET and prelims beginning at 4 p.m. ET.  Live coverage begins on Friday at 5 p.m. ET with UFC Fight Night Pre-Show: Font vs. Garbrandt on ESPN+.

In a battle for a shot at the UFC Bantamweight title, this week’s main event is all but certain to deliver an action-packed showdown as No. 3-ranked contender Rob Font (18-4-0) and current No. 4-ranked and former champion Cody Garbrandt (12-3-0) meet in the Octagon.  With his recently-minted top five status, New England’s Font is fighting at an all-time high with impressive stoppages and a three-fight win streak heading into Saturday, looking for the biggest win of his career.  Sacramento’s former bantamweight champion Garbrandt is on a mission to get back to the top, showcasing his power as one of the division’s most dangerous strikers after spectacularly knocking out Raphael Assuncao in his last fight.

In another top-five showdown on the card, women’s strawweights collide as No. 3-ranked Yan Xiaonan (13-1-0) of China faces off against former champion and No. 4-ranked Carla Esparza (18-6-0) in hopes of fulfilling championship aspirations in the near future.

Fans can sign-up for ESPN+ at any time at ESPN.com, ESPNPlus.com/ufc or on the ESPN App for mobile and connected TV devices, for $5.99 per month or $59.99 per year.

About UFC®
UFC® is the world’s premier mixed martial arts organization (MMA), with more than 625 million fans and 142 million social media followers. The organization produces more than 40 live events annually in some of the most prestigious arenas around the world, while broadcasting to approximately 900M TV households across more than 175 territories. UFC’s athlete roster features the world’s best MMA athletes representing more than 70 countries. The organization’s digital offerings include UFC FIGHT PASS®, one of the world’s leading streaming services for combat sports. UFC was acquired in 2016 by global entertainment, sports and content company Endeavor, along with strategic investors Silver Lake Partners and KKR. UFC is headquartered in Las Vegas, Nevada. For more information, visit UFC.com and follow UFC at Facebook.com/UFC, Twitter, Snapchat, Instagram and TikTok: @UFC.