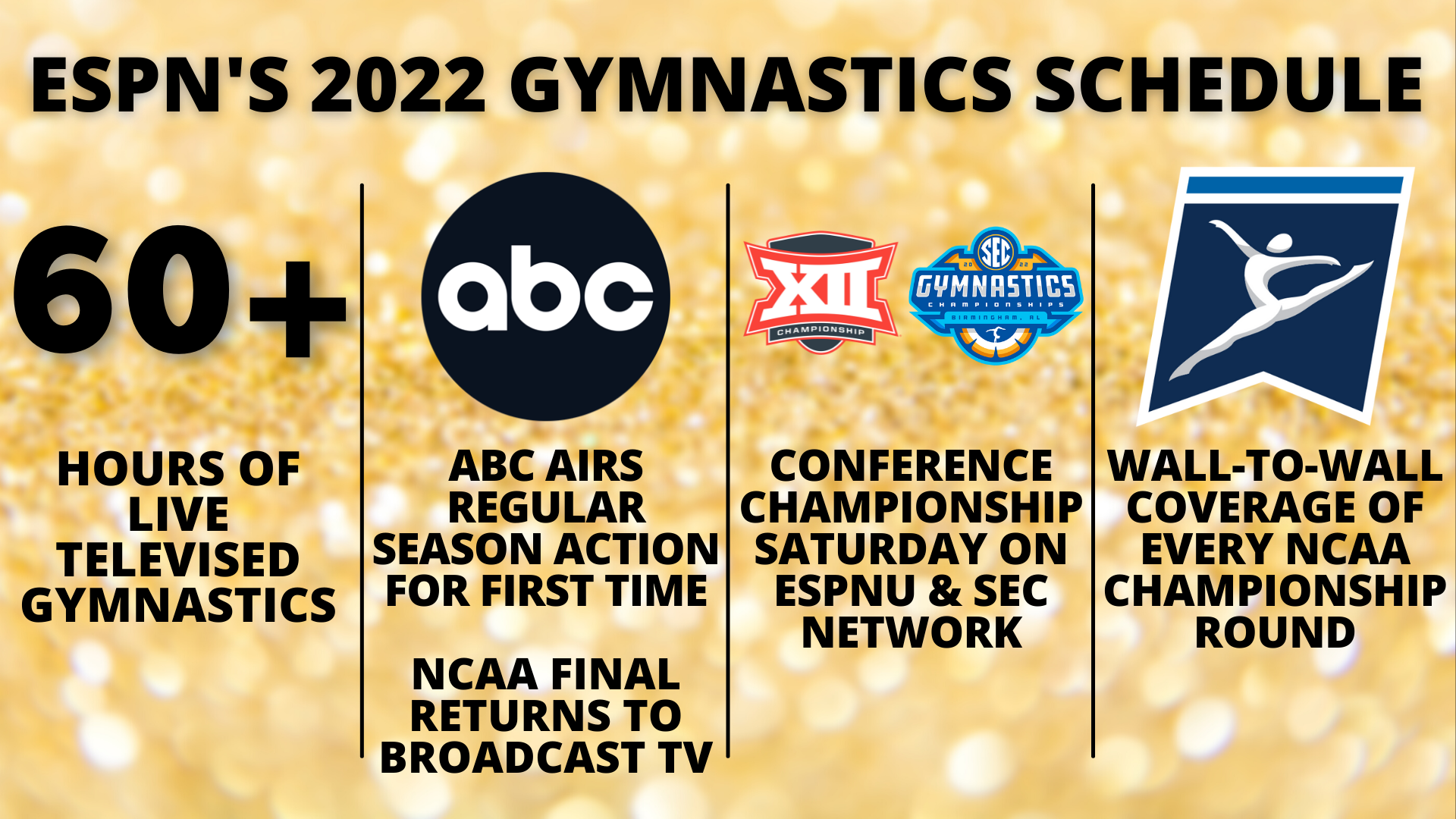 ESPN continues to stick the landing in its NCAA Gymnastics coverage across ESPN networks, with more than 60 hours of flips, full-outs and all-around action in 2022. Collegiate gymnastics will shine in the spotlight once again this season, with broadcast coverage on ABC for both the 2022 NCAA National Collegiate Women’s Gymnastics Championships and a regular season meet between perennial powerhouses.

ABC was the home of last year’s NCAA trophy and the 2022 NCAA National Collegiate Women’s Gymnastics Championships return to ABC this spring. The Championship Final will be live on Saturday, April 16 at 1 p.m. ET. Semifinal I will take place on Thursday, April 14 at 1 p.m. on ESPN2 with Semifinal II airing live at 6 p.m. Thursday, also on ESPN2. Also returning this season is streaming coverage of NCAA Regionals, with the four regional competitions live on the ESPN App via ESPN3/ESPN+ with coverage of every gymnast and apparatus.

New in 2022, ABC will broadcast a regular season contest, as two of the top teams in the Southeastern Conference, Alabama and Florida, flip into action on Sunday, Jan. 16 at 3 p.m.

Between the regular season, Conference Championship Saturday and comprehensive coverage of all rounds of the NCAA Gymnastics Championship, more than thirty meets featuring teams from the Big Ten, Big 12, Pac-12 and SEC will be available across ABC, ESPN, ESPN2, ESPNU, SEC Network, ESPN3 and ESPN+, with additional action on SEC Network+ throughout the season.

Defending national champion Michigan will be on ESPN networks three times in 2022, beginning with a Big Ten meet against in-state rival Michigan State on Sunday, Jan 30 at 2 p.m., on ESPNU. For the fifth straight season, ESPN networks will carry college gymnastics on Super Bowl Sunday, with a Big Ten battle between Penn State and Michigan on ESPN2 at 6 p.m., on Sunday, Feb. 13. Michigan’s final regular season TV appearance will be on the road at 2021 NCAA runner-up and four-time NCAA Champion Oklahoma at 9 p.m. on Sunday, March 4 on ESPN2.

SEC Network’s “Friday Night Heights” franchise returns in 2022, with eight consecutive weekends of high-flying action from around the conference beginning on Friday, Jan. 7. Viewers will be treated to a record five “Friday Night Heights” tripleheaders on SEC Network and ESPN2 featuring SEC squads during the 2022 regular season, including a quadruple-header on Friday, Feb. 18. In total, SEC Network will showcase 19 live meets in the 2022 regular season. Please click here for more on SEC gymnastics.

ESPNU and SEC Network are teaming up once again to close out the regular season with Championship Saturday on Saturday, March 19. The Big 12 Gymnastics Championship will be carried live in primetime at 7 p.m. with the champion crowned on ESPNU.

The SEC Gymnastics Championship will be telecast live, with the 2022 edition airing exclusively on SEC Network. Coverage of the afternoon session flips on at 3:30 p.m. with the evening session tumbling along at 8 p.m.

Amanda is the Communications Manager for ESPN College Football and SEC Network, and oversees publicity for college gymnastics and track & field across all ESPN networks. Amanda is a proud alum of Hendrix College in Conway, Ark., and earned her master's in ethics from Vanderbilt University. A native of Kent, Ohio, she is a die-hard Cleveland Indians fan.
Check Also
Close
Facebook Twitter WhatsApp Telegram
Back to top button
Close
ESPN.com ESPN Images ESPN Front Row
Close