The 2022 Stanley Cup Playoffs on ESPN presented by GEICO continue into the second round with exclusive doubleheaders this Wednesday, Friday, Sunday and Tuesday on ESPN, ESPN2 and ESPN Deportes. ESPN will air the entirety of the Metropolitan and Pacific divisions on alternating days, beginning Wednesday, May 18. ESPN’s NHL-focused studio show, The Point, will air every day except Friday and Sunday, as a lead-in to games throughout the Stanley Cup Playoffs and Final.

Thanks to Artemi Panarin scoring the OT winner on Sunday night, the New York Rangers head to the second round to take on the Carolina Hurricanes. The Canes, who entered the postseason as a No. 1 seed and won the Metropolitan Division over the Rangers, picked up a win of their own in Game 7 against the Bruins on Saturday afternoon.

Meanwhile, for the first time since 1991, the Pacific Division sees Canadian rivals Calgary Flames and Edmonton Oilers meet up in the Stanley Cup Playoffs for the Battle of Alberta. The Flames needed seven games to take down the Stars in the first round, with Johnny Gaudreau scoring the overtime winner in Game 7 to send Calgary to the second round. The Oilers were also pushed to a Game 7 in the first round by the Kings, where Connor McDavid scored 14 points in the series to lead all playoff scorers in the first round.

The commentator and telecast details for each game are detailed below. Commentator assignments and coverage details for ESPN’s games beyond Game 4 will be announced in the coming days. All Stanley Cup Playoff games will also be available for replay on ESPN+. Quest For The Stanley Cup, the behind-the-scenes documentary series chronicling the remaining eight teams competing in the 2022 Stanley Cup Playoffs and vying for the chance to hoist the Stanley Cup, returns Friday, May 27. A first look, The Quest Begins, will premiere on NHL Network and the NHL’s YouTube and Facebook channels along with ESPN+ on May 20 before the series drops weekly on Friday nights starting May 27, exclusively on ESPN+ in the U.S. and at YouTube.com/NHL in Canada. Watch the trailer here. 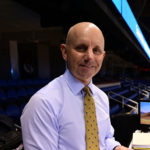