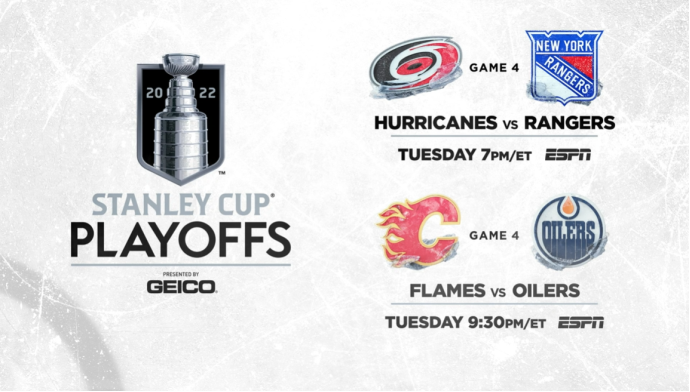 The 2022 Stanley Cup Playoffs presented by GEICO continue with second round action tonight on ESPN, featuring the Carolina Hurricanes at New York Rangers and Calgary Flames at Edmonton Oilers in a Game 4 doubleheader beginning at 7 p.m. ET. On Thursday, May 26, the Rangers head back to Carolina to take on the Hurricanes, while the Flames host the Oilers on home ice, in a Game 5 doubleheader on ESPN, beginning at 7 p.m. ET.

ESPN’s NHL-focused studio show, The Point, airs Monday through Thursday this week on ESPN2 and ESPN+. New episodes of In The Crease stream exclusively on ESPN+ each game day, following the last game of the day, with in-depth analysis, interviews, highlights and more from all the day’s NHL game action.

After two tough road losses put them in another series deficit, the New York Rangers again bounced back with a big home win against the Carolina Hurricanes in Game 3. Mika Zibanejad’s goal and assist along with goaltender Igor Shesterkin’s 43-save effort helped the Rangers climb back into the series. The Hurricanes try to stop the Rangers from tying the series tonight at Madison Square Garden and build on their impressive playoff home record of 4-1.

The Oilers’ star trio of Connor McDavid, Leon Draisaitl and team-newcomer Evander Kane continue to propel the team, now with a combined for 55 points through Edmonton’s first 10 games of the Stanley Cup Playoffs. The Flames duo of Johnny Gaudreau and Matthew Tkachuk aim to even the series and hold off Kane, who scored three consecutive goals in a span of six minutes in Game 3, while McDavid extended his streak of multi-point playoff games to six.

The commentator and telecast details for each game are detailed below. Commentator assignments and coverage details for ESPN’s games beyond Game 5 – if necessary – will be announced in the coming days. All Stanley Cup Playoff games will also be available for replay on ESPN+. 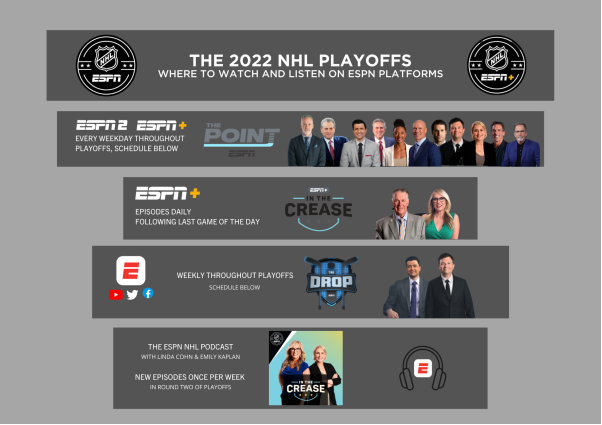 Quest For The Stanley Cup, the behind-the-scenes documentary series chronicling the remaining eight teams competing in the 2022 Stanley Cup Playoffs and vying for the chance to hoist the Stanley Cup, returns Friday, May 27, exclusively on ESPN+ in the U.S. and at YouTube.com/NHL in Canada. Watch the trailer here.