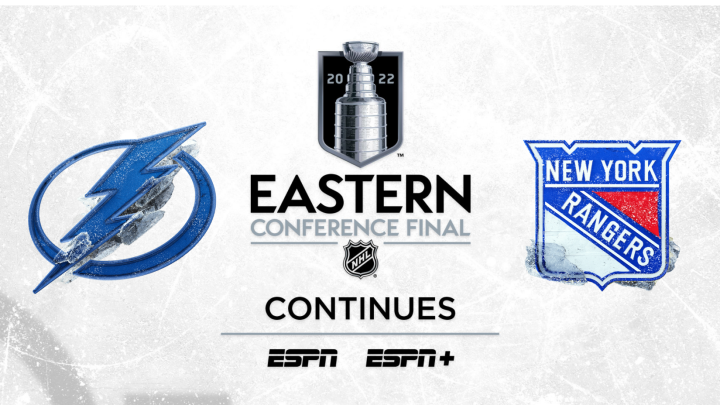 The 2022 Stanley Cup Playoffs presented by GEICO continue with the Eastern Conference Final tonight on ESPN, featuring the New York Rangers at Tampa Bay Lightning beginning at 8 p.m. ET. Each Eastern Conference game will be available on ESPN, ESPN Deportes and ESPN+. In addition, a special alternate presentation of the game – Ice Cast – will give fans a view of the game from above the ice.

ESPN’s NHL-focused studio show, The Point, airs daily on ESPN and ESPN+. New episodes of In The Crease stream exclusively on ESPN+ each game day, following the last game of the day, with in-depth analysis, interviews, highlights and more from all the day’s NHL game action.

The two-time defending champion Lightning look to become the fourth different NHL franchise to three-peat and first since the Islanders from 1980-83. The Lightning vs. Rangers series features a matchup between two of the top goaltenders in the NHL – Andrei Vasilevskiy and Igor Shesterkin.

The New York Rangers secured the fourth and final spot in the 2022 Conference Finals thanks to a six-goal Game 7. The fourth team in Stanley Cup Playoffs history to win multiple series in one postseason after facing a multi-game deficit in each. The Rangers last advanced to the Conference Finals in 2015, where the Tampa Bay Lightning won the series with a Game 7 shutout win.

The commentator and telecast details for each game are detailed below. Commentator assignments and coverage details for ESPN’s games beyond Game 5 – if necessary – will be announced in the coming days. All Stanley Cup Playoff games will also be available for replay on ESPN+. 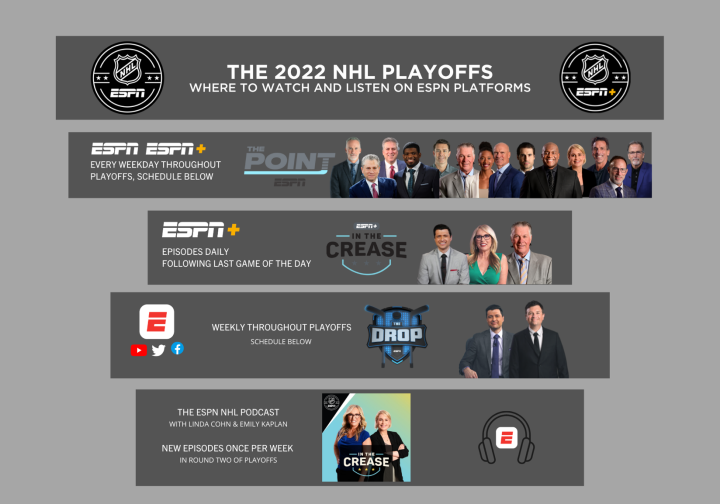 Quest For The Stanley Cup, the behind-the-scenes documentary series chronicling the remaining eight teams competing in the 2022 Stanley Cup Playoffs and vying for the chance to hoist the Stanley Cup, continues every Friday, exclusively on ESPN+.