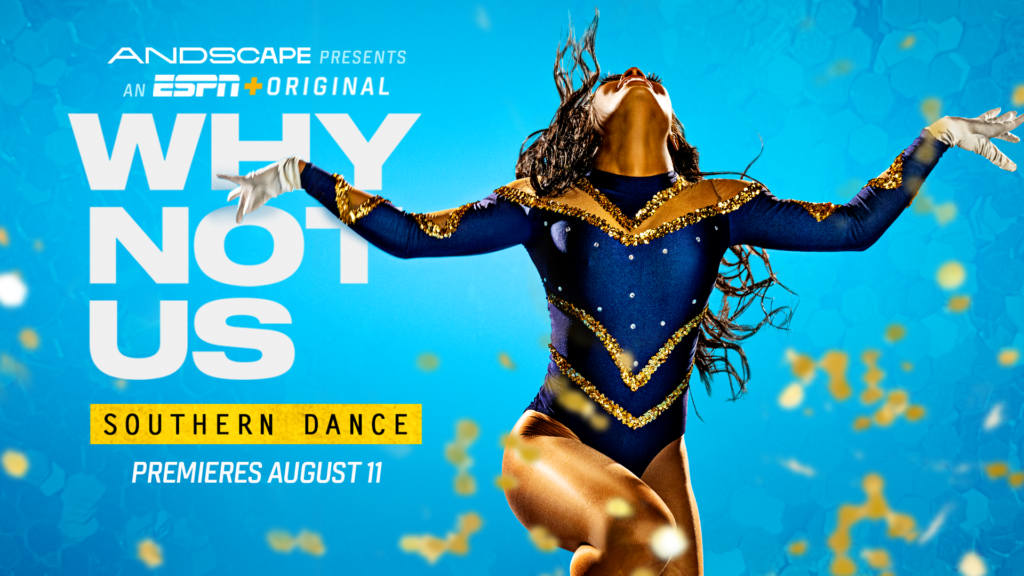 Why Not Us: Southern Dance, the third season of the acclaimed Why Not Us series from Andscape and executive produced by NBA All-Star and entrepreneur Chris Paul, will premiere Thursday, August 11, exclusively on ESPN+. The new, eight-episode ESPN+ Original will take fans behind-the-scenes of Southern University’s dance line, the Dancing Dolls.

For over 50 years, the Dolls have set the standard for collegiate dance lines nationwide. Powered by the booming sounds of the school’s marching band, the Human Jukebox, the Dancing Dolls push the envelope with every performance, creating unique choreography stemming from their diverse dance backgrounds. Beyond the field, the Dolls are role models in their communities and represent what it means to be strong Black women, pushing the culture with their talent and artistry.

“The third season of Why Not Us will continue to shine a spotlight on the importance of HBCUs and celebrate the culture and influence of these institutions,” said Paul. “This season will focus on Southern University’s nationally acclaimed Dancing Dolls and will capture the drive, talent and vision of these powerful black women leading the way.”

“We are so excited to showcase another unique aspect of HBCU culture in this season of Why Not Us,” said Brian Lockhart, Senior Vice President, Original Content. “Over the past 50 years, the Dancing Dolls have solidified their place in an elite tier of dancers and have proven to be the foremost innovators amongst the nation’s top dance teams. We are looking forward to reaching more sports fans with their unique story.”

Like the first two seasons of Why Not Us, which followed the North Carolina Central men’s basketball team and FAMU’s football program, Why Not Us: Southern Dance will examine the distinct culture, experiences and challenges of an HBCU athletic program.

Coached by the magnetic Dr. Akai Smith, the Dolls navigate the rigors of practice, classes and upholding the legacy of the Forever Dolls that came before them. Comprised of dancers from different regions across the country, the Fabulous Dancing Dolls of Southern University grow in their craft, as students, and in life.

Presented by Andscape, Why Not Us: Southern Dance is produced by Roadside Entertainment, Paul’s Ohh Dip!!! Productions, and ESPN+. The Why Not Us series highlights the ethos of being a student and student-athlete at an HBCU. The series spotlights the importance of these remarkable schools and who have done more with less.

Paul left Wake Forest University early before being selected No. 4 overall in the 2005 NBA Draft and is now working toward a degree at Winston-Salem State University. He has actively supported HBCUs for years, including assisting with HBCU voting initiatives and partnering with Sour Patch Kids and the Thurgood Marshall College Fund to create The Mischief for Change Scholarship, a college scholarship fund with a $1 million commitment over the next five years for students attending HBCUs. In November, he will host the second annual circuit of two HBCU events, the Boost Mobile HBCU Tip-Off and the Boost Mobile HBCU Challenge Hosted by Chris Paul, in partnership with The Naismith Memorial Basketball Hall of Fame. Paul was recently appointed to President Biden’s advisory board on Historically Black Colleges and Universities.

Paul partnered with Harvard Business School to bring its Entertainment, Media and Sports program to select HBCUs to develop a pipeline for students pursuing careers in those industries.

Andscape is a Black media platform dedicated to creating, highlighting, and uplifting the diverse stories of Black identity. Magnified by the power and reach of ESPN and The Walt Disney Company, the Andscape umbrella includes an editorial division, book publishing arm, film and television division, and music publishing group – each united by the shared mission of illuminating the culture and experience of Blackness. Founded in 2022, Andscape is a reimagination, expansion and diversification of The Undefeated’s former platform.

Ohh Dip!!! Productions collaborated with ESPN Films on Paul’s three-part docuseries Chris Paul’s Chapter 3, which chronicles his offseason move to the Houston Rockets in 2017, and the 2018 film Crossroads, which was produced by Roadside Entertainment and follows a group of Black American boys in North Carolina who discover a love for lacrosse and their team’s journey in overcoming adversity. Ohh Dip!!! produced Why Not Us: North Carolina Central University Men’s Basketball (ESPN+), an in-depth look at the NCCU men’s basketball team, the challenges they face on the court, and what it means to play for an HBCU. In addition, Ohh Dip!!! produced Why Not Us: FAMU Football, the second season of the Why Not Us series taking fans behind-the-scenes of Florida A&M Football as the Rattlers experience one of the most eagerly anticipated football seasons in school history.

Additional projects include The Game Changers, an award-winning 2018 documentary about plant-based eating, Quibi’s Blackballed (2020), the inside story of Donald Sterling and the L.A. Clippers, and The Day Sports Stood Still, a documentary from director Antoine Fuqua and Imagine Documentaries about the shutdown of sports due to Covid-19 for HBO and streaming on HBO Max.

Upcoming projects include American Sole, a feature film following two characters played by Pete Davidson and O’Shea Jackson Jr. in the sneaker reselling industry, and 61, a biographical film based on Paul’s upcoming memoir that is in development for Disney+.  Ohh Dip!!! co-produces Bloomberg Quicktake’s How I Got Here with Chris Paul, an in-depth weekly one-on-one interview series hosted by Paul and featuring guests from the various worlds he touches — sports, business, entertainment and politics. In addition, Ohh Dip!!! produces PlayersTV’s Front Office, a series featuring a behind the-scenes look at athletes making strategic investments in their fans’ business ideas.

Founded in 2004 by Emmy Award-winning producer/directors John Hirsch and Ron Yassen, Roadside Entertainment has a simple goal: Find great stories and bring them to life, seeking out characters who through force of will or the dynamics of circumstance rise up and inspire us in extraordinary ways. As filmmakers, Hirsch and Yassen take nothing for granted and strive to bring creative storytelling, honesty and integrity to everything they do. Hirsch co-produces the ESPY Awards on ABC and is an Executive Producer and Showrunner on Marvel’s Hero Project, on Disney+. Yassen’s credits include more than 30 documentary films, including Roger Maris: Reluctant Hero, Glory in Black and White, Kareem: Minority of One, and 50 Cent: Origin of Me. In addition to the ESPYs, Roadside previously collaborated with ESPN on the Emmy-nominated documentary Crossroads, which premiered at the Tribeca film festival in 2018

About Southern University and A&M College

Southern University and A&M College, a Carnegie Research 2 institution, is the flagship of the Southern University System, the only historically black college and university system in the nation. Located in Baton Rouge, Louisiana, Southern is home to more than 7,000 diverse students majoring in a vast array of programs leading to bachelor’s, master’s and doctoral degrees. Learn more about Southern at www.subr.edu.