ESPN’s lead WNBA commentator team of Ryan Ruocco, Rebecca Lobo and Holly Rowe will call the Skills Competition joined by top host/analyst LaChina Robinson. Rowe will report from the sidelines with the competitors while Robinson will have interviews inside the arena with spectators and special guests.

Both telecasts will feature unique player access elements, including mic’d up participants and in-game interviews. WNBA All-Star & Team Co-captain Wilson will be mic’d up during ESPN’s telecast of the MTN DEW® 3-Point Contest. Throughout ESPN’s coverage Wilson, part of the MTN DEW athlete roster, will provide commentary, insights & real time reactions to the most exciting moments of the event.

During Sunday’s telecast, ESPN will tell the story of Brittney Griner, whom the WNBA has named an Honorary All-Star for this year’s event. The eight-time All-Star and member of the Phoenix Mercury has been detained in Russia since February. ESPN senior writer T.J. Quinn reports.

ESPN Social
ESPN Social will cover the 2022 AT&T WNBA All-Star game with several on-site executions led by Britnee McCoy-Davis and Terrika Foster-Brasby, including original content for ESPN and espnW TikTok and IG Reels, as well as behind the scenes content of players and talent for all social platforms. Special custom images highlighting new All-Stars’ participation, All-Star MVP and more will be shared on various social media platforms as well.

WNBA Hoop Streams Presented by Google, hosted by Christine Williamson, will precede the All-Star game at 12:30 p.m. ET on Sunday. The digital pregame show is available on ESPN’s Twitter, Facebook and YouTube platforms, as well as the ESPN App.

ESPN Digital
ESPN.com women’s basketball reporters Alexa Philippou and Mechelle Voepel will provide live coverage, analysis and reaction on-site in Chicago. Before and after the All-Star break, ESPN.com will offer a full package of WNBA midseason analysis, including:

ICYMI: Below are notable ESPN stories from the first half of the WNBA season: 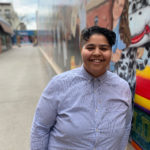