ESPN’s Steve Levy (play-by-play), Louis Riddick and Dan Orlovsky (analysts), along with Laura Rutledge (reporter), will broadcast multiple NFL games during the 2022 NFL season as ESPN’s NFL portfolio grows to 21 regular season matchups, the most in the network’s history. The enhanced slate includes three occurrences where ESPN will produce multiple games in the same week, including the debut of multiple Monday Night Football games on the same night (Week 2) and the first ESPN+ exclusive contest (Week 8). ESPN’s regular season will conclude, once again, with an NFL on ESPN: Doubleheader Saturday (Week 18).

In advance of the season, ESPN has re-signed Levy, Riddick and Orlovsky, with each of them, along with Rutledge, playing an integral part in ESPN’s NFL coverage and beyond. For the 2022 NFL season, as part of those multiple games in the same week/day, the new grouping will call the following games:

Levy and Riddick called Monday Night Football during the 2020 and 2021 seasons, with now-San Francisco 49ers quarterback coach Brian Griese. Orlovsky, who has been an NFL studio analyst and college football game analyst with ESPN since 2018, will be making his NFL game debut this season. A veteran of many high profile college football games, Rutledge worked her first NFL game in 2018 and has been a sideline reporter in select NFL games in subsequent seasons.

Joe Buck and Troy Aikman will make their ESPN NFL premiere, along with Lisa Salters, in Week 1 when the Denver Broncos and Russell Wilson travel to Seattle (Sept. 12, 8 p.m.). 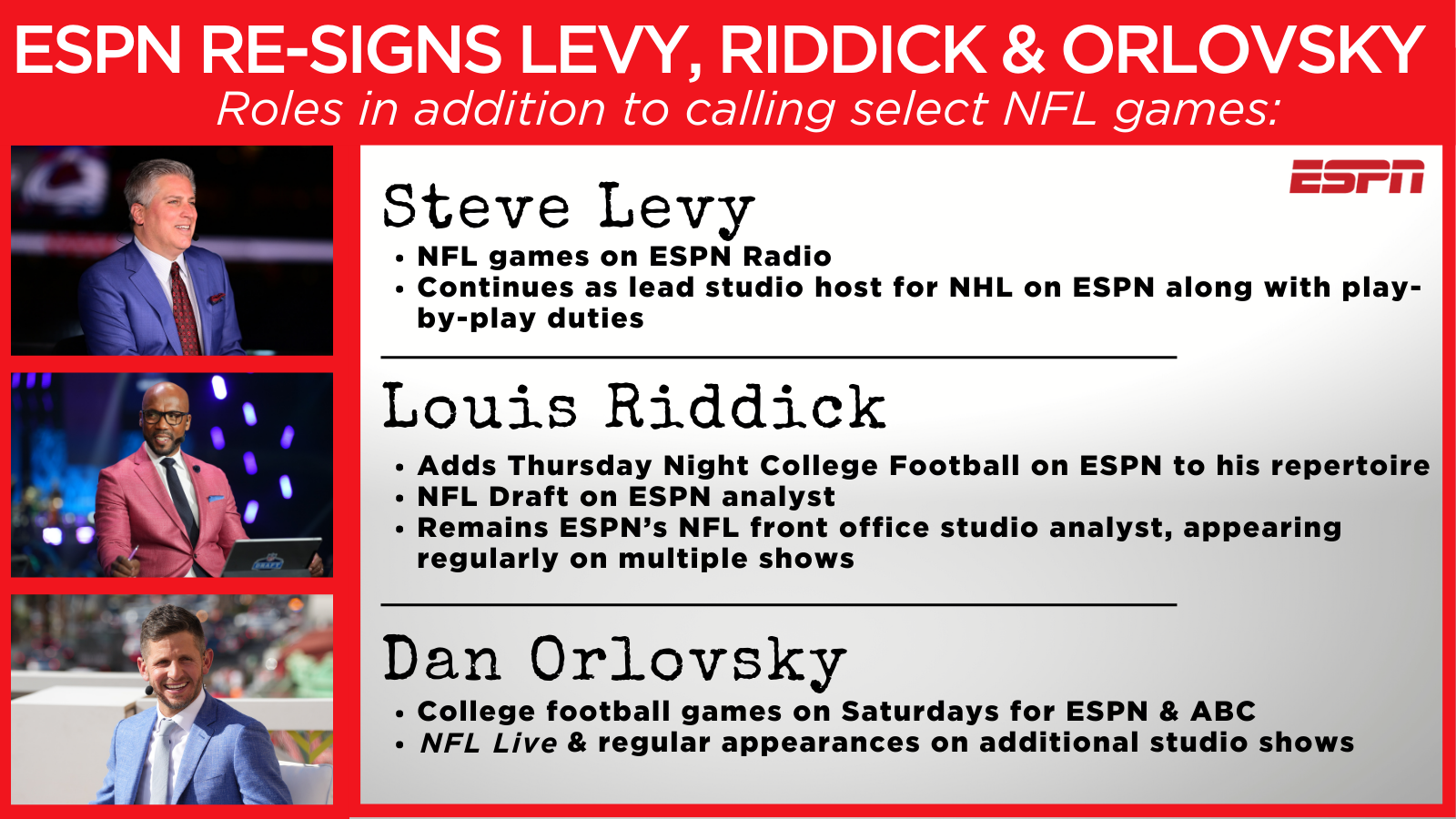 ESPN’s NFL Portfolio Continues to Grow
ESPN’s enhanced NFL schedule this year is a prelude to even more games starting in the 2023 season when the new rights agreement between ESPN and the NFL begins. Then, ESPN will have 25 games each season, consisting of 23 regular season games, a Super Wild Card game and a Divisional Playoff game.