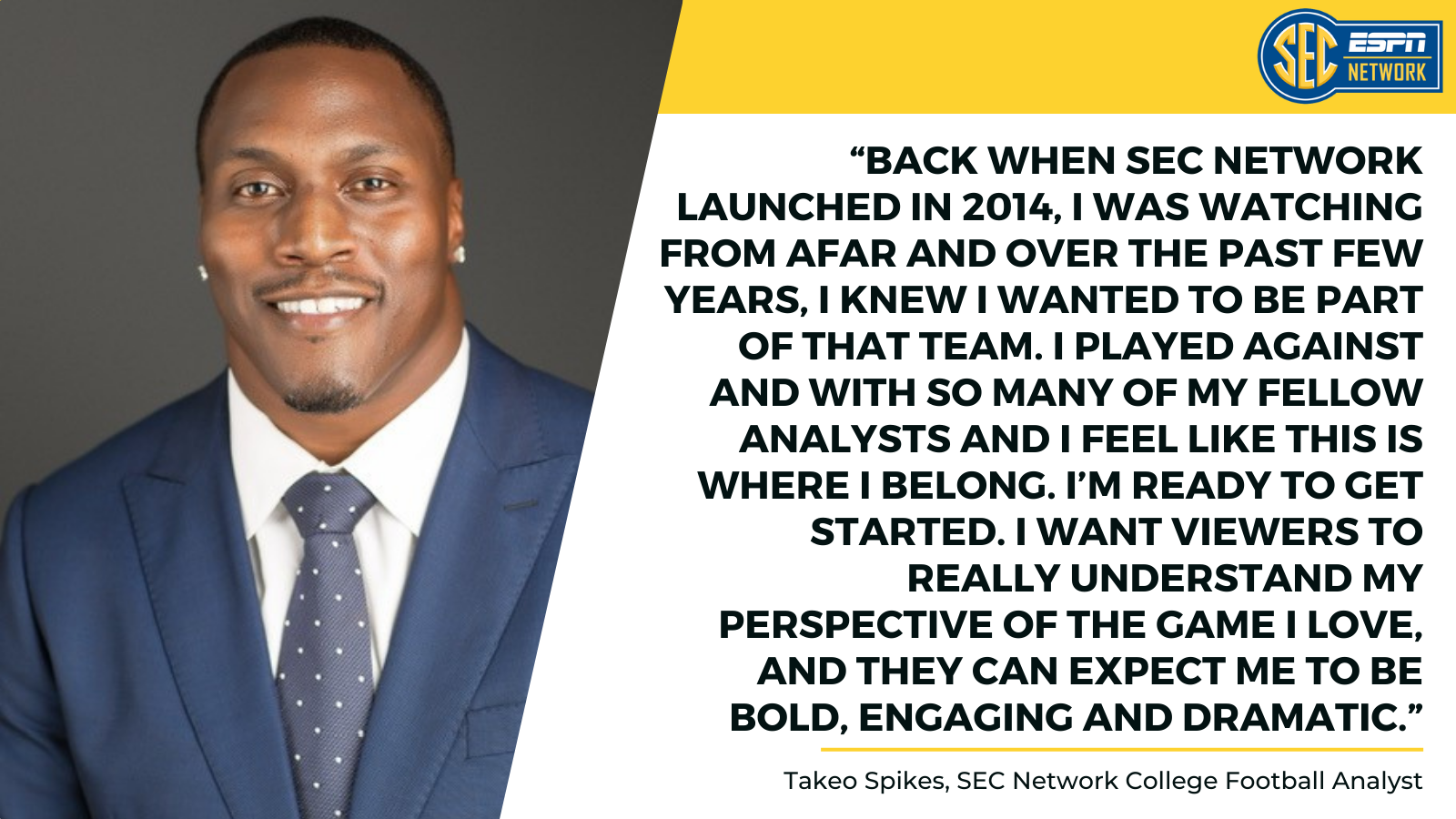 Fifteen-year NFL veteran and Auburn Tiger great Takeo Spikes has signed a deal to join SEC Network as a college football studio analyst. Spikes will be a mainstay of the network’s SEC Now and SEC Football Final programs throughout the fall, and the two-time Pro Bowler kicks off his SEC Network tenure as part of SEC Kickoff Presented by Regions Bank, July 18-21.

“Back when SEC Network launched in 2014, I was watching from afar and over the past few years, I knew I wanted to be part of that team,” Spikes said. “I played against and with so many of my fellow analysts and I feel like this is where I belong. I’m ready to get started. I want viewers to really understand my perspective of the game I love, and they can expect me to be bold, engaging and dramatic.”

Spikes was a standout linebacker at Auburn and the 1997 SEC Championship Game MVP. He spent 15 seasons in the NFL, including stints with the Buffalo Bills, the Philadelphia Eagles, the San Francisco 49ers and the San Diego Chargers. He was the 13th overall pick in the 1998 NFL Draft, starting his career with the Cincinnati Bengals. Spikes was a 2003 and 2004 Pro Bowler and First Team All-Pro with the Bills in 2004.

“We’ve had our eye on Takeo for a long time,” said Tom McCollum, ESPN vice president, production. “He brings an energy and expertise that fits well with our crew and his passion for the SEC runs deep. He will be a great addition to our studio on Fridays and Saturdays.”

Spikes is the author of Takeo Spikes Presents: Behind the Mask, which has expanded to a podcast series. The show provides post-game analysis each week throughout the NFL season that features pro athletes and celebrities discussing various topics from relationships to untold personal stories. Spikes attended SEC Media Days as a student-athlete, and the SEC legend is looking forward to experiencing the event in a different way.

“You go from when I was a player and fast forward to now, you see SEC Network and the magnitude of what they bring from a media standpoint,” Spikes noted. “The visibility programs get from being on and part of the network is unmatched.”

The Sandersville, Ga. native was a leader on the field and off during his time in the NFL, serving as team captain 13 out of his 15 seasons and registering 70 or more tackles in 14 of 15 seasons. Recently named as an inductee into the Georgia High School Football Hall of Fame, Spikes was inducted into the Alabama Sports Hall of Fame in 2017.