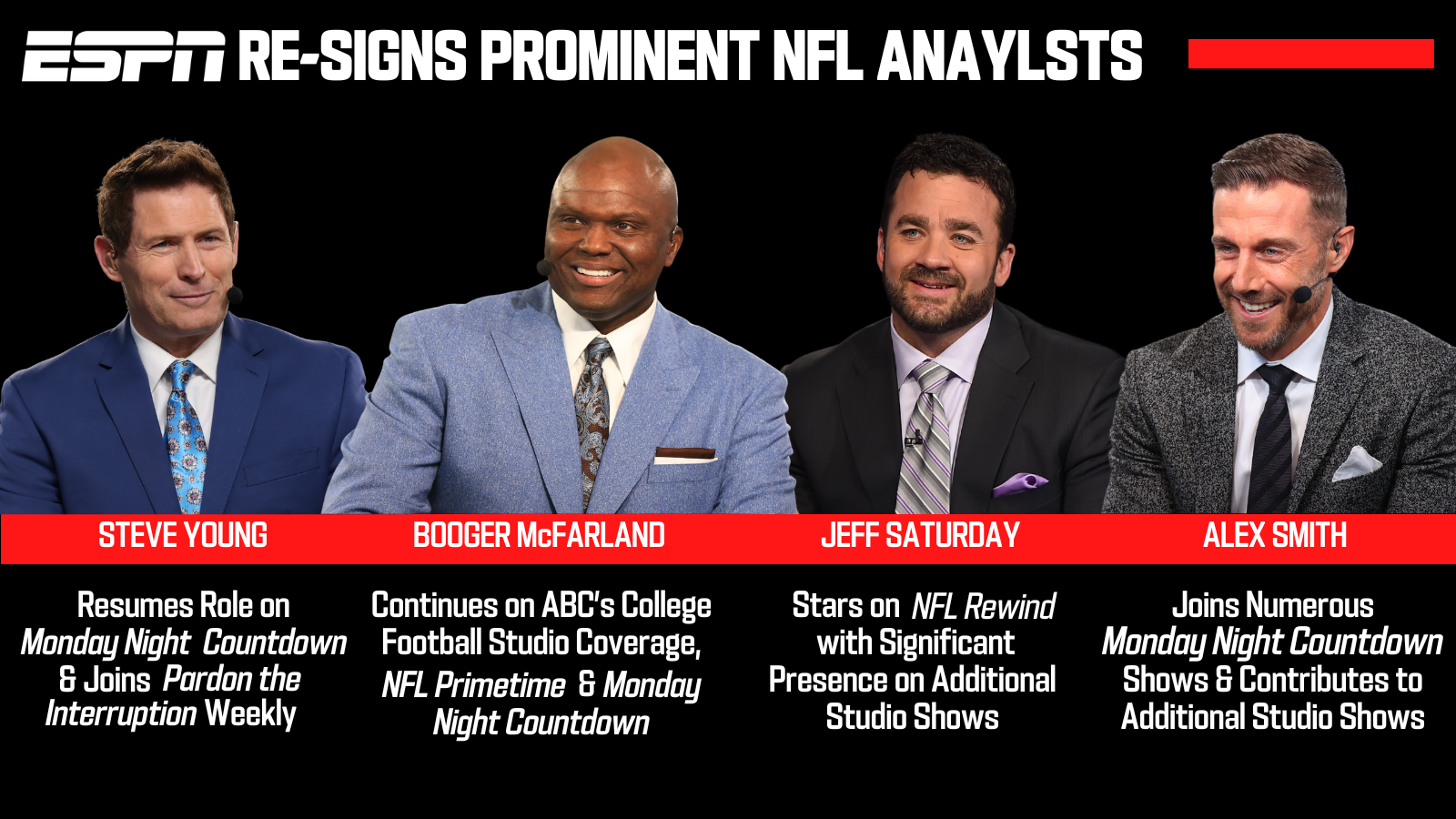 ESPN has re-signed Pro Football Hall of Famer Steve Young, Super Bowl Champions Booger McFarland and Jeff Saturday, and Pro Bowl Quarterback Alex Smith ahead of the 2022 NFL Season. The four analysts will continue to be showcased across ESPN’s studio programming on a regular basis, providing reaction to breaking news and top NFL storylines along with strategic insight into on-the-field and roster maneuvers.

McFarland will continue to appear across NFL and college football programming for three consecutive days each football weekend, concluding with Monday Night Countdown. The 1999 first round pick out of LSU will continue to appear on ABC’s college football studio coverage each Saturday and NFL Primetime on Sundays alongside Chris Berman, with the iconic highlights show available on ESPN+. McFarland will also keep his integral role on ESPN’s coverage of the NFL Draft and ESPN’s College Football Playoff offerings.

Saturday will also be featured every Monday of the NFL season, appearing on NFL Rewind. The weekly highlights show kicks-off ESPN’s football-centric afternoon programming leading into Monday Night Football. Saturday remains a mainstay on Get Up, including his popular “Sat ‘Em Down” segment, SportsCenter and additional studio shows throughout the season.

More on Booger McFarland
The new agreement extends McFarland’s ESPN tenure into its second decade, having joined ESPN in 2014 serving as one of the SEC Network’s first commentators upon its launch. In his time at the network, he has been a significant part of ESPN’s most prominent football events including the NFL Draft since 2019. His media success followed his playing career which began as the No. 15 overall pick (out of LSU) by the Tampa Bay Buccaneers in the 1999 NFL Draft and was part of two Super Bowl-winning teams – SB XXXVII (Tampa) and XLI (Indianapolis). McFarland’s ESPN bio can be found here.

More on Steve Young
After playing 15 seasons in the NFL and winning three Super Bowls, Young joined ESPN as an analyst on Sunday NFL Countdown in 2000 before assuming a full-time role with the network in 2001. He contributed to ABC’s coverage of Super Bowl XXXIV (2000), XXXVII (2003) and XL (2006) as a studio analyst. For more than a decade, he has contributed to several shows, including Monday Night Countdown. Young’s ESPN bio can be found here.

More on Jeff Saturday
Saturday’s new agreement will extend the two-time All Pro’s tenure with ESPN beyond a decade, having joined the network in 2013 immediately following his six-time Pro Bowl playing career. He has been a regular across ESPN’s portfolio of programming, playing significant roles on SportsCenter, Get Up, NFL Rewind and more. Saturday’s NFL career spanned 14 years, primarily with the Indianapolis Colts (1999-2011). Saturday was a fixture on the Colts team that won Super Bowl XLI. The Sporting News named him to the NFL All-Decade Team (2000-09) and he achieved first-team All-Pro honors twice (2005, 2007). Saturday’s ESPN bio can be found here.

More on Alex Smith
Smith will enter his second season with ESPN, after joining the network in April 2021. The California-native passed for more than 35,000 yards, threw nearly 200 touchdowns and appeared in more than 175 games, including five seasons with Kansas City (2013-17) and three with Washington (2018-20) following eight with the 49ers (2005-12).  He earned Pro Bowl honors in 2013, ’16 and ’17.In his first year with ESPN, he interviewed many top quarterbacks including Patrick Mahomes, Matthew Stafford, and Kirk Cousins, while also appearing onsite at multiple Monday Night Countdown shows.