Pat McAfee is joining College GameDay Built by The Home Depot as an analyst as part of a new multi-year agreement with ESPN. One of the most dynamic and entertaining personalities in sports media, McAfee will now be a full-time member of college football’s premier pregame show, beginning this Saturday, Sept. 10, in Austin, Texas before the Alabama-Texas game.

McAfee, who previously appeared on GameDay in 2019 and 2020, will also contribute to ESPN’s coverage of The Rose Bowl Game, and the College Football Playoff Semifinals and National Championship. As part of a separate agreement with Peyton Manning’s Omaha Productions, McAfee will host six college football alternate telecasts this season produced by Omaha in collaboration with ESPN. The first telecast is planned for Saturday, Oct. 1 on ESPN2 (game TBD).

Beyond college football, McAfee will be part of ESPN’s Super Bowl and Pro Bowl coverage and make select appearances on weekday morning editions of Get Up.

“Pat is exceptionally talented and entertaining, and he was so well-received in his previous stint on College GameDay that we’ve wanted to reunite him with the show ever since,” said Jimmy Pitaro, Chairman, ESPN and Sports Content, The Walt Disney Company. “We’re thrilled Pat is returning to ESPN for college football and for even more opportunities in the years ahead.”

“College GameDay is one of those shows that is universally beloved. It’s an institution. It’s a Saturday tradition for everybody. From truck drivers to suits and all the folks in between, GameDay is a staple of all of our fall routines,” said McAfee. “Getting the opportunity to join full time is an absolute honor. I understand the weight that the show holds in the sports universe and I will try my best to somehow add to it.”

McAfee added: “I can’t wait to celebrate everything that makes college football amazing with the show that has embodied everything great about sports television for the last three decades-plus. This is truly a unique opportunity that furthers the notion that I am currently living the dumbest life of all time. I’m grateful for it all. Big thanks to Paisano Jimmy Pitaro for making this happen. I’ll see yinz in Austin, Texas. Let’s have a great season!”

A college football All-American at West Virginia and All-Pro NFL punter with the Indianapolis Colts, McAfee has established himself as one of the most entertaining figures in sports media since retiring from football. In addition to hosting The Pat McAfee Show, McAfee has worked for a variety of media companies in various roles, spanning Wrestlemania to ESPN, where he was a regular contributor to College GameDay in 2019 and 2020. He also called ESPN Thursday Night college football games in 2019 and regularly appeared on Get Up.

McAfee was selected by the Colts in the 2009 NFL Draft following his college career at West Virginia as a kicker and punter. A four-year starter (2005-08), McAfee finished with 384 points and accumulated more than 5,500 punting yards for the Mountaineers and was named an All-American his senior year. During his nine NFL seasons, McAfee was one of the league’s best punters. He was named an All-Pro (2014) and a Pro Bowler (2014, 2016). A native of Plum, Pa., outside Pittsburgh, McAfee retired after the 2016 NFL season. 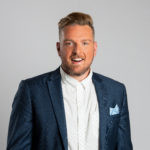