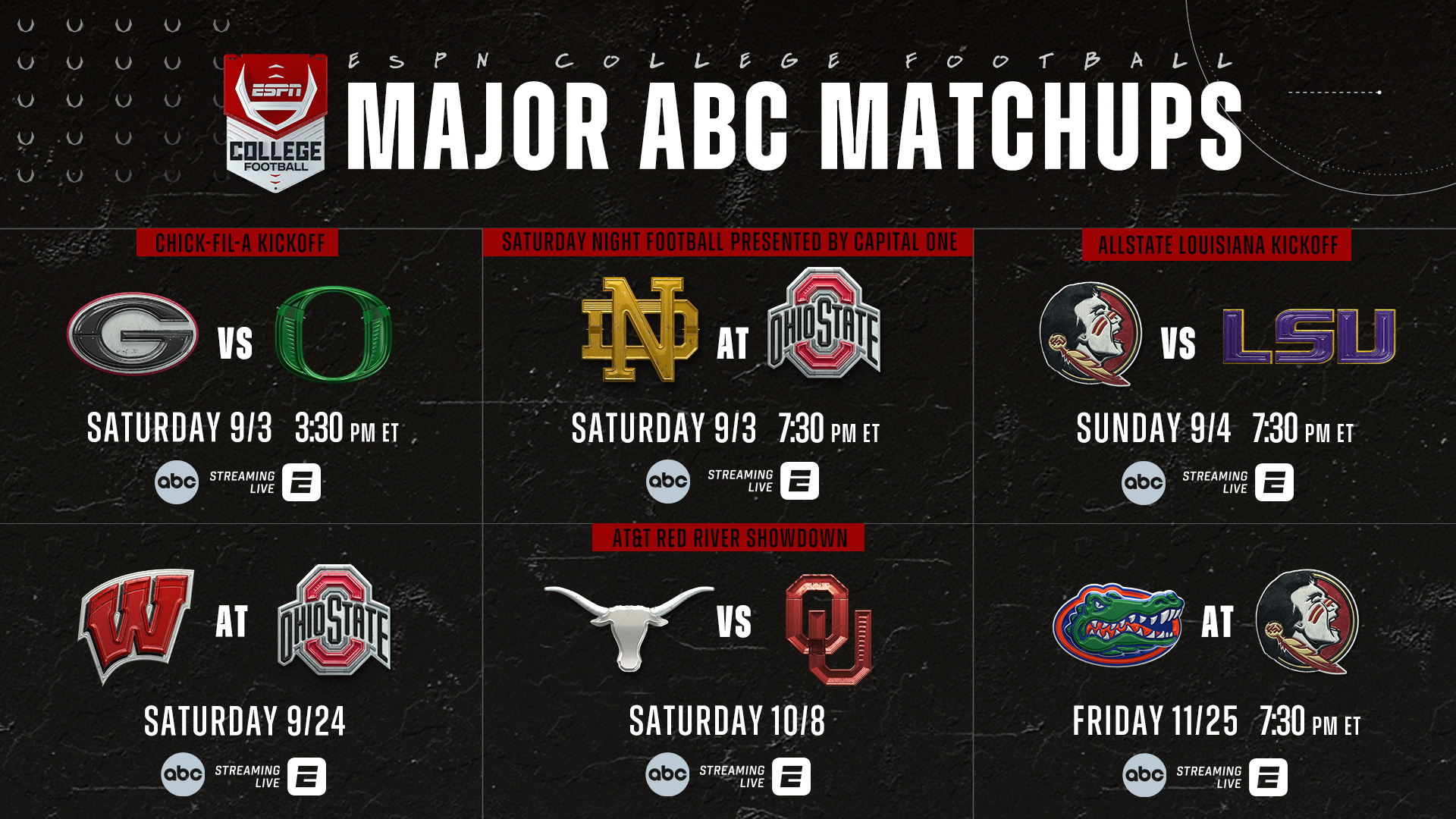 ESPN’s industry-leading presentation of college football is primed for center stage again this fall with blockbuster matchups featuring many of the sport’s biggest names and greatest rivalries kicking off the early-season 2022 schedule. All of the Power 5 conferences are represented in this initial schedule of six ABC games featuring classic college football rivals and top-tier showdowns at neutral sites. On ABC’s Saturday Night Football presented by Capital One, Notre Dame treks to Columbus to take on the Ohio State Buckeyes under the lights of The Shoe (7:30 p.m., ABC). Two of the most storied and iconic brands in the sport have met six times previously, with the Buckeyes carrying a four-game win streak since 1995. The Fighting Irish’s first-year head coach Marcus Freeman returns to Ohio State where he was a standout linebacker for the Buckeyes.

In the morning, College GameDay Built by The Home Depot will be in Columbus to celebrate the start of another college football campaign. Hosted by Rece Davis and featuring former Buckeyes quarterback Kirk Herbstreit, this will be GameDay’s first on-campus show of the 2022 season and its 21st visit all time to Columbus – more than any other city. Entering its 36th season this fall, the premier three-hour pregame show airs from 9 a.m. – noon on ESPN and ESPNU.

The Labor Day Sunday night showdown (Sept. 4) on ABC is the Allstate Louisiana Kickoff, as Florida State and LSU – under new head coach Brian Kelly – look to win big in the Big Easy. This will be the 10th meeting all time between the Seminoles and Tigers, but their first since 1991.

Ohio State Welcomes Wisconsin for Big Ten Battle in Week 4
On September 24, Wisconsin travels to Columbus to take on Big Ten rival Ohio State on ABC. The Badgers and Buckeyes have met three times for the Big Ten Football Championship, though they have not played each other in the regular season since 2019. The time for this marquee conference contest will be announced at a later date.

Red River Rivalry Returns to ABC in Week 6
The fifth-longest rivalry in college football history resumes October 8 on ABC (time TBD), as Texas and Oklahoma clash at the Cotton Bowl in the AT&T Red River Showdown. Last year in Dallas, the Sooners overcame a 21-point deficit in a thrilling 55-48 comeback win. In all, the margin of victory in seven of the past 10 Red River games has been a touchdown or less.

Sunshine State Showdown Set for Thanksgiving Friday Tussle
For the first time ever, ABC will broadcast a Thanksgiving Friday college football game in primetime. The Florida-Florida State rivalry game the day after Thanksgiving is set for the spotlight, as the Gators and Noles battle for the Florida Cup under the lights in Tallahassee on Friday, Nov. 25 at 7:30 p.m. on ABC.

In total, five of ESPN’s Way-Too-Early Top 25 teams are featured in this first round of games revealed during Tuesday’s Disney Advertising Upfront.

The first three weeks of ESPN’s 2022 college football schedule, all special date games and ESPN’s Bowl Season schedule will be unveiled on Thursday, May 26.