ESPN has signed sports betting analyst Doug Kezirian, host of the network’s program Daily Wager, to a new, multiyear contract. As part of the new deal, Kezirian has relocated to Las Vegas and will host Daily Wager from ESPN’s just-opened studio at The LINQ Hotel + Experience when the program returns to the air on Tuesday, Sept. 8, at 6 p.m. ET on ESPN2.

In addition, ESPN has boosted its sports betting roster with the fulltime additions of analysts/hosts Joe Fortenbaugh and Tyler Fulghum, both of whom also will work from Las Vegas.

“On a personal level, I’m thrilled that I’m able to stay with ESPN and continue what we started in the betting space,” said Kezirian. “I’ve been along for the ride for many years including hosting Daily Wager and I think this move to Las Vegas is just the latest step in the overall vision that ESPN has for sports betting. I’m incredibly fortunate and grateful that the team believes in me to help launch this in Las Vegas.”

Kezirian, who joined ESPN in 2012 as an anchor for SportsCenter, has hosted Daily Wager since the program launched in March of 2019. He also hosts the Behind the Bets with Doug Kezirian podcast and writes for the betting section of ESPN.com.

He previously lived in Las Vegas for seven years, where he was sports director and anchor for the city’s ABC affiliate TV station. He also co-founded a sports betting radio show that eventually landed on the city’s ESPN Radio affiliate station and he has covered sports betting for more than 15 years.

“It makes perfect sense to go to Las Vegas,” said the Los Angeles native and former Brown University water polo player. “Obviously sports betting legalization is growing across the country but to have the access we will have in Las Vegas and to have boots on the ground is something I’m looking forward to as a journalist and as someone who is immersed in sports betting.”

Fortenbaugh, who has contributed to Daily Wager as an analyst since the show began, will continue in that role but also will co-host a new digital sports betting program that ESPN will launch for football season and will contribute to both ESPN Radio and to ESPN digital content.

Fortenbaugh’s resume includes co-founding NationalFootballPost.com, where he was a writer and manager from 2008-2014, hosting “The Sharp 600″ sports betting podcast and appearing as a sports betting analyst on dozens of radio shows around the country. A law school graduate, he had been a morning radio host on “95.7 The Game” in San Francisco since 2014. Like Kezirian, Fortenbaugh is returning to Las Vegas, having lived and worked there from 2011-2014.

Fulghum, who was with Stadium in Chicago from 2013 until recently, also will be an analyst for Daily Wager and a co-host for the new digital show. At Stadium, he was co-host of the Sauce & Shram show from 2018-2020 and analyzed sports betting and fantasy.

Prior to joining Stadium, Fulghum was a sports reporter for KHQA-TV in Quincy, Ill., from 2007-2008 and then was Sports Director at KMIZ-TV in Columbia, Mo., covering mid-Missouri sports and Mizzou Athletics from 2009-2013, graduating from the Missouri School of Journalism.

Daily Wager, which was launched to better serve the millions of sports fans who participate in sports betting, and to help educate general sports fans with more in-depth analysis, moved to ESPN2 in August of 2019 after debuting on ESPNEWS. During football season, the program will air Tuesday-Friday at 6 p.m. ET with a Sunday morning edition at 9 a.m.

The program has been on hiatus during the pandemic but Daily Wager segments have appeared on SportsCenter and the ESPN YouTube channel during that time.

ESPN and Caesars Entertainment, Inc., debuted the studio at The LINQ Hotel + Experience on August. 24 with produced segments for SportsCenter and digital platforms, which will continue until and after Daily Wager returns Sept. 8. 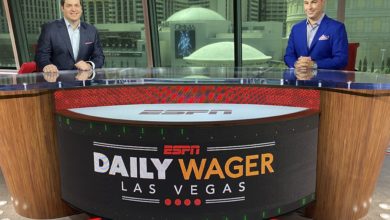