Solidifying the lineup at its Los Angeles Production Center (LAPC), ESPN has re-signed SportsCenter anchors Neil Everett and Ashley Brewer to new contracts to remain with the network. As part of her new deal, Brewer will relocate from ESPN’s Connecticut headquarters to Los Angeles.

Everett and Brewer join Stan Verrett, who also recently signed a new deal, and Linda Cohn as anchors based at the LAPC. On a rotating basis, the four will host the 1 a.m. ET edition of SportsCenter that originates from Los Angeles and contribute to the 11 p.m. edition that originates from Connecticut.

In addition, all will contribute to other digital productions originating from the LAPC, with Cohn continuing her role as host of the nightly (during hockey season) ESPN+ NHL program In the Crease.

Everett, who joined ESPN in July of 2000, has worked from Los Angeles since the LAPC opened in March of 2009. Everett came to ESPN after working for 15 years for various affiliates in Honolulu, and previously served as an assistant athletic director and sports information director at Hawaii Pacific University. He is a native of Spokane, Wash., and a graduate of the University of Oregon.

For Brewer, the move in mid-August will be a return to her second home. Prior to joining ESPN in early 2020, the Scottsdale, Az., native and former University of Southern California swimmer had worked as weekend anchor and host for ABC7 in Los Angeles, covering the Dodgers in the World Series, the Rams in the Super Bowl, and other major sporting events. She also co-hosted The Bachelor Winter Games on ABC.

In addition to anchoring SportsCenter, Brewer currently is a co-host of the ESPN+ program SportsNation, and she will become a fill-in host for the program after her relocation. Her SportsNation role will be filled by a variety of people until a new permanent host can be named. 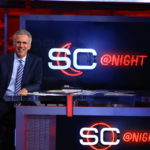