ESPN has signed former Florida and Mississippi State head coach Dan Mullen as a college football studio analyst, contributing every Saturday on ESPN2 in addition to ESPN studio wraps on Thursday and Friday nights. Mullen joins anchor Kevin Connors, who is beginning his fourth season on the ESPN2 desk, and analyst Sam Acho returning on the regular ESPN2 studio crew.

Mullen boasts nearly three decades of coaching experience, including 13 as a head coach. He spent nine years at the helm of Mississippi State and a combined eight years at the University of Florida, first as offensive coordinator/quarterbacks coach and returning to Gainesville as head coach from 2018-21. Mullen has joined ESPN and SEC Network throughout the past few years as a guest analyst, including at last year’s SEC Championship Game, as well as the past two College Football Playoff National Championships.

Connors’ wide-ranging studio assignments include regular editions of SportsCenter, college football and basketball wraps, as well as Major League Baseball. He has handled play-by-play for college basketball and MLB games on ESPN as well. Acho is back for his second season with ESPN and will also serve as a booth analyst for select college football games this fall. 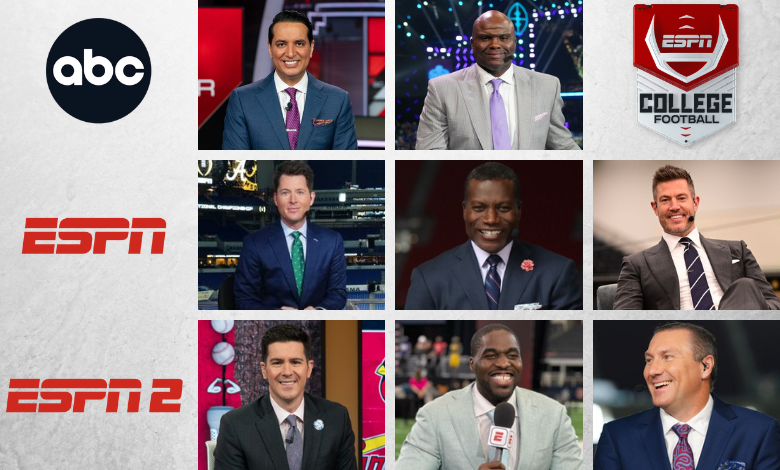 Galloway, now in his 12th season with ESPN, and Palmer, who joined ESPN in 2007 and also hosts ABC’s The Bachelor, continue their prominent studio roles. The former Ohio State All-American wide receiver and Florida quarterback, respectively, will contribute analysis to marquee ESPN college football programming throughout the season. In addition to their traditional studio wraps, Barrie, Galloway and Palmer will also close out each Saturday with College Football Final, highlighting the day in college football.

Negandhi and McFarland Team Up on ABC
Longtime host Kevin Negandhi and college football and NFL analyst Booger McFarland will team up for their third straight season in studio together, wrapping up Saturday action on ABC for the 2022-23 campaign. McFarland and Negandhi also worked together on ABC wraps during the 2017 season.