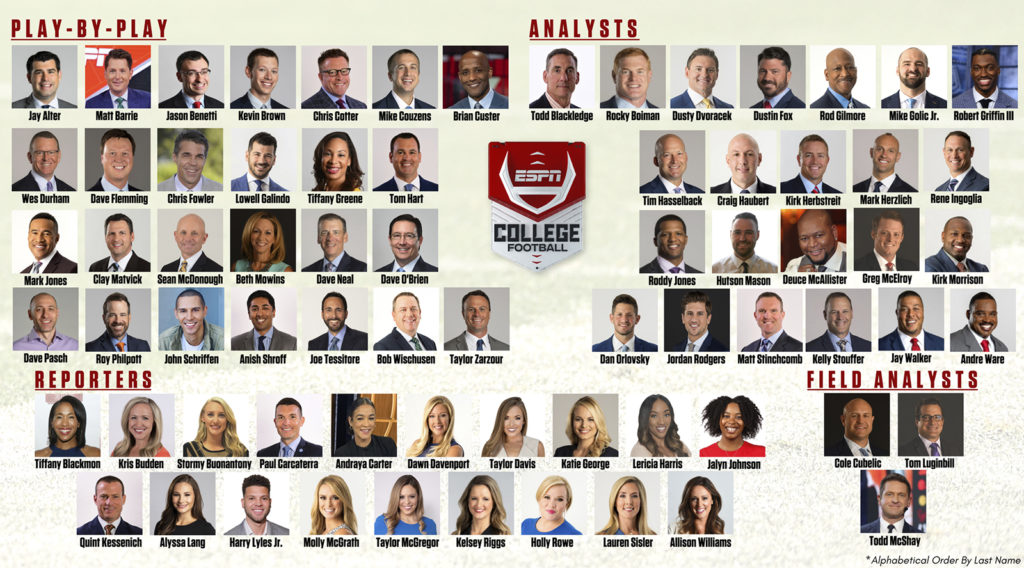 ESPN will kick off its industry-leading coverage of the 2021-22 college football season in week 1 with nearly 60 games, including the highly-anticipated non-conference matchups in the Duke’s Mayo Classic in Charlotte – No. 5 Georgia vs. No. 3 Clemson – and Chick-fil-A Kickoff in Atlanta – No. 1 Alabama vs. No. 14 Miami. The opening weekend slate features games on six consecutive nights (Sept. 1-6) and culminates with primetime showdowns Sunday on ABC (No. 9 Notre Dame at Florida State) and on the traditional Labor Day Monday on ESPN (Louisville vs. Ole Miss).

In all, four of the top-five teams and nine of the top 10 in the 2021 AP preseason rankings will be in action across ESPN platforms during week 1.

With the start of the new season, ESPN’s unmatched roster of commentators will feature a mix of familiar faces, new assignments, a host of newcomers and the return of many veteran voices.

Fowler, Herbstreit and Rowe Debut with No. 5 Georgia vs. No. 3 Clemson (Sat, 7:30 p.m. ET | ABC)
Chris Fowler, Kirk Herbstreit and reporter Holly Rowe will team up to call the weekly ABC Saturday Night Football presented by Capital One marquee matchup, beginning with one of the most-anticipated games of the season – the top-five showdown between Georgia and Clemson in the Duke’s Mayo Classic in Charlotte.

The 2021 season marks Fowler and Herbstreit’s eighth year in the SNF booth and their 26th season as college football teammates, having worked together since 1996 on College GameDay. Fowler and Herbstreit have called every College Football Playoff National Championship. Rowe joins the team following the recent announcement of her move to the SNF crew, as she kicks off her 26th season covering college football for ESPN and ABC.

McDonough and Blackledge will work together for the third year, joined for a second season by McShay and McGrath, who is back on the sidelines after taking maternity leave at the end of 2020. McDonough – also a leading voice in ESPN’s NHL coverage this fall – and Blackledge combine for more than four decades of broadcast experience, while McShay continues to serve as one of ESPN’s NFL Draft experts and McGrath covers a multitude of college sports across ESPN networks as both a reporter and host.

This will be the second straight season that longtime ESPN play-by-play voice Tessitore and former Alabama National Champion quarterback McElroy are partnering in the ABC and ESPN booth. For the better part of two decades, Tessitore has been a premier broadcaster for ESPN and ABC’s coverage of college football, as well as the veteran blow-by-blow ringside commentator for Top Rank Boxing on ESPN and the co-host of Holey Moley on ABC. McElroy is beginning his sixth season calling games for ESPN and has studio experience on ESPN and SEC Network as well. This fall, George moves to ABC and ESPN games following her first two seasons on ACC Network Primetime.